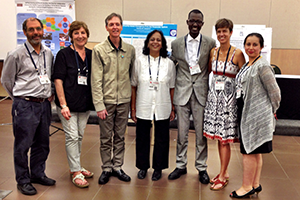 The 2014 annual international conference of The Network: Towards Unity for Health (TUFH) took place November 19-23, 2014, in Fortaleza, Brazil. The conference theme was “Strengthening Health Professions Education as a Policy to Improve Health,” and its program included keynote addresses, didactic sessions, workshops, and poster sessions built around this theme, as well as site visits to local community health care facilities.

A highlight of the 2014 Network: TUFH conference was the session presenting winners of the second annual Projects That Work competition, sponsored and organized by FAIMER, which showcased seven projects that have been successfully addressing missions related to the conference theme for three years or longer. An annual feature of The Network: TUFH conference, Projects That Work recognizes excellent projects that have succeeded beyond initial implementation and have had a significant impact on health, the community, or the school, in order to encourage the development, implementation, and dissemination of more such projects. An open worldwide call resulted in 64 submissions, from which seven were selected by an international panel of 13 reviewers.

Projects That Work will also be a feature of the next Network: TUFH conference to be held in Pretoria, South Africa, September 12-16, 2015. Check back in January for an announcement of the opening of the 2015 competition application.