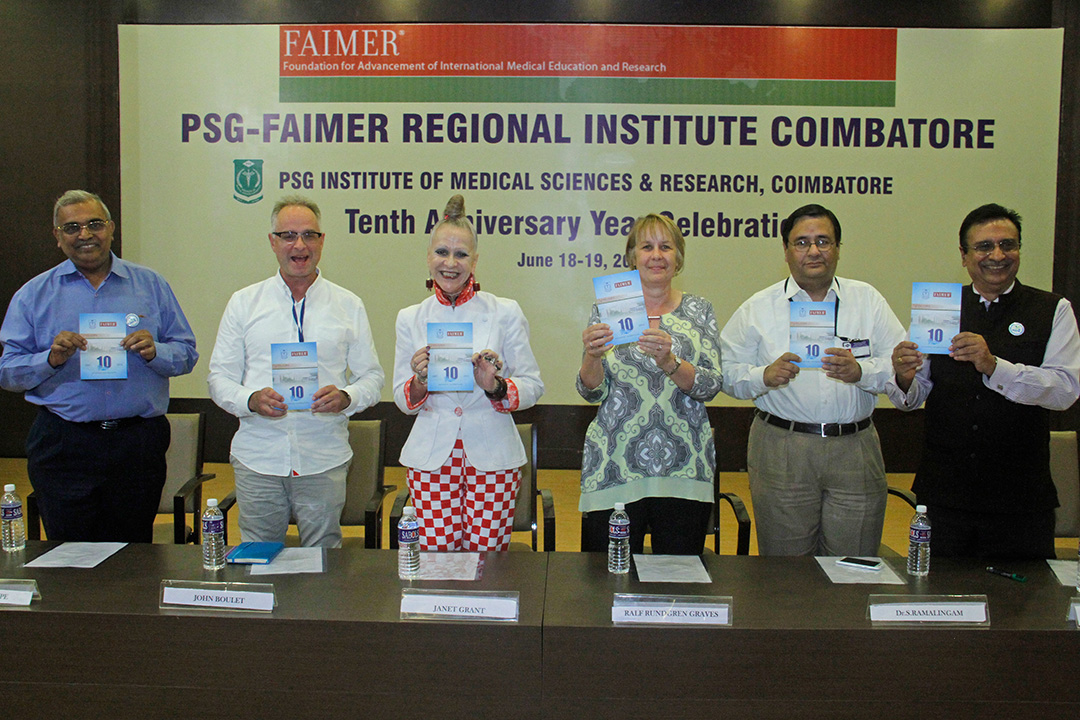 In June 2016, the PSG-FAIMER Regional Institute welcomed its 10th class of Fellows and celebrated this important milestone in Coimbatore, India. Approximately 120 people took part in the decennial anniversary celebration on June 18, including the 16 incoming PSG-FAIMER Fellows, alumni, and local and international faculty. Presiding over the celebration was Dr. S. Ramalingam, Dean of PSG Institute of Medical Sciences & Research and a 2010 PSG-FAIMER Fellow. FAIMER’s Director of Regional Institutes, Ralf Rundgren Graves, served as Chief Guest and presented PSG-FAIMER Director Dr. Thomas Chacko with a commemorative plaque. Felicitations were offered by Dr. Avinash Supe, Director of the GSMC-FAIMER Regional Institute; Dr. Jack Boulet, FAIMER Vice President for Research and Data Resources; and Dr. Janet Grant, Director of The Centre for Medical Education in Context (CenMEDIC) in the United Kingdom. On June 19, alumni and Fellows took part in four capacity-building workshops facilitated by international faculty.

PSG-FAIMER, the fourth of FAIMER’s Regional Institutes to be developed, began in 2007 under the direction of Dr. Chacko. Dr. Chacko is Professor and Head of the Department of Community Medicine and Medical Education at PSG Institute of Medical Sciences & Research, as well as a 2004 Fellow of the FAIMER Institute. More than 150 health professions educators from India and other parts of South Asia have participated in the program over the past decade.

To commemorate the 10-year anniversary, a booklet was published to highlight the history of the PSG-FAIMER program and share reflections from faculty and Fellows. A copy of the booklet (PDF – 6 MB) can be accessed here.