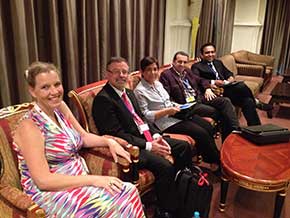 The 2013 annual international conference of The Network: Towards Unity for Health (TUFH) took place November 16-20, 2013, in Ayutthaya, Thailand. The conference theme was “Rural and Community-Based Healthcare: Opportunities and Challenges for the 21st Century,” and its program included keynote addresses, didactic sessions, workshops, and poster sessions built around this theme, as well as a day devoted to visiting community health care facilities.

A highlight of the 2013 Network: TUFH conference was the first annual Projects That Work plenary session, sponsored and organized by FAIMER, which showcased five projects that have been successfully addressing missions related to the conference theme for three years or longer. The intent of the Projects That Work initiative—which will be an annual feature of The Network: TUFH conference—is to recognize excellent projects that have succeeded beyond initial implementation and have had a significant impact on health, the community, or the school, as well as to encourage the development, implementation, and dissemination of more such projects. An open worldwide call resulted in 120 submissions, from which five were selected by an international panel of 13 reviewers.

Projects That Work will also be a feature of the next Network: TUFH conference to be held in Fortaleza, Brazil, November 19-23, 2014. Check back for an announcement of the opening of the competition application soon.

FAIMER is pleased to announce the selection of five winners of its first annual Projects That Work competition. They will be sponsored to attend the 2013 annual meeting of The Network: Towards Unity for Health (TUFH), to be held November 16-20, 2013, in Ayutthaya, Thailand. There they will serve as the panelists of a plenary session that will showcase projects that have been successfully addressing missions related to the conference theme of “Rural and Community-based Healthcare: Opportunities and Challenges for the 21st Century” for three years or longer, in order to give conference attendees insights about factors that have contributed to these projects’ success and sustainability. An open worldwide call resulted in 120 submissions from which five were selected by an international panel of 11 reviewers. The Projects That Work competition will be an ongoing feature of The Network: TUFH annual meeting. The next Network: TUFH meeting will be held in Fortaleza, Brazil, November 18-23, 2014.

For more information, including winners’ names and summaries of the selected projects, please see the full press release.

The deadline is approaching to apply for FAIMER funding to present at the November 2013 Network: Towards Unity for Health (TUFH) conference!

Many education innovation projects in health professions institutions are implemented, but only some result in significant, sustained change. A new highlight of the 2013 Network: TUFH conference in Thailand will feature “Projects That Work” – that is, projects that have survived beyond initial implementation and have had a significant positive impact on health, the community, or the school over three or more years. A plenary panel during the conference will provide representatives of a few outstanding examples of such projects with an opportunity to tell their stories so that others can learn from their success. Projects that exemplify the conference theme of “Rural and Community Based Healthcare” will be of particular interest.

FAIMER will sponsor a representative of up to five selected projects to attend the Network: TUFH conference, to be held November 16-20, 2013, in Ayutthaya, Thailand. Sponsorship includes air travel, hotel accommodation, and conference registration fee. Applications must be submitted by May 15, 2013. To apply click here.

The 11th Thai Medical Education Conference, “Globalization and Medical Education,” was hosted by the Faculty of Health Sciences, Chulalongkorn University, in Bangkok, Thailand, March 27-29, 2010. The conference provided an opportunity for participants to discuss medical education strategies and processes with a view toward improving healthcare services in South East Asia. The focus of discourse was on meeting the changing demands of today’s globalized society.

The conference was supported by the Consortium of Thai Medical Schools, the World Health Organization (WHO), the World Federation for Medical Education (WFME), and by Chulalongkorn University. Attendees included WFME President Stefan Lindgren; members of the WFME Executive Council, including Chair of the FAIMER Board of Directors and Educational Commission for Foreign Medical Graduates (ECFMG) President Emmanuel G. Cassimatis; President of the Association for Medical Education in Europe (AMEE) Madalena Folque Patrício; President of the Association of Medical Schools in Europe (AMSE) David Gordon; President of Chulalongkorn University Pirom Kamolratanakul; executive committee members of the South East Asia Regional Association of the World Federation for Medical Education (SEARAME), including PSG-FAIMER Regional Institute Director Thomas Chacko (PHIL 2004) and FAIMER faculty member Rita Sood (PHIL 2005); members of WHO; and delegates from Thailand. Executive-level meetings of both WFME and SEARAME were held in conjunction with the conference.

Among the numerous presentations given at the conference were the following key lectures:

Roles of Medical Doctors towards the Next Decades
Stefan Lindgren, President, WFME